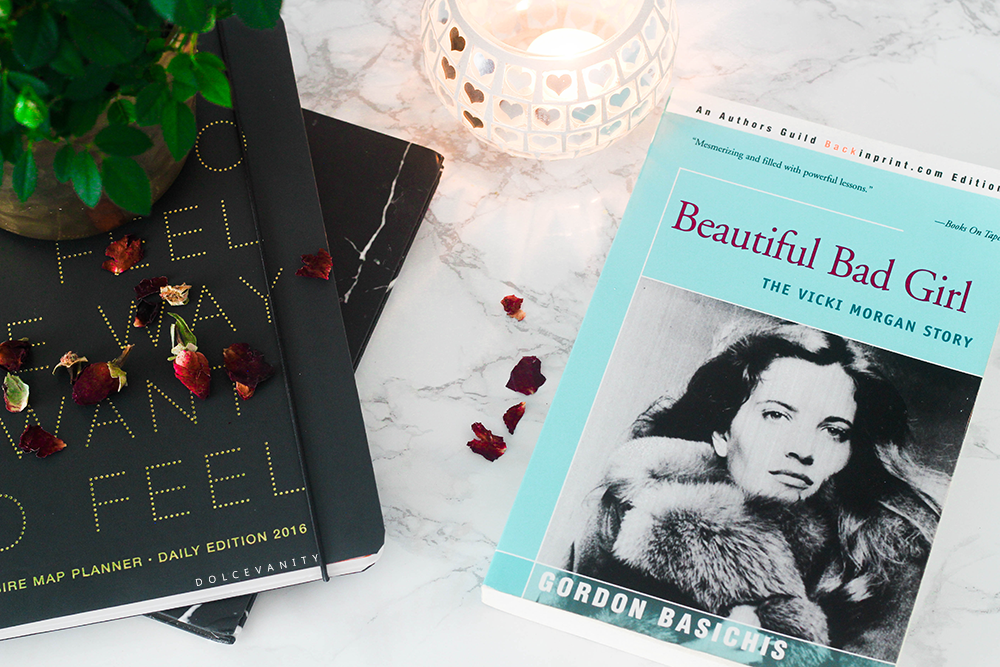 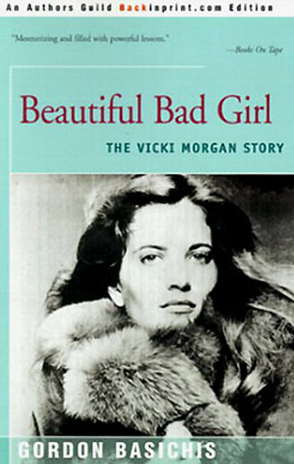 Vicki Morgan was a runaway kid from small town America who became the longtime mistress of Alfred Bloomingdale--department store heir, Diner's Club founder, and "kitchen cabinet" confidant of President Reagan. She has been depicted as a high-priced mistress who willingly participated in Bloomingdale's alleged sadomasochistic sex games, relishing a life of high spending luxury, high society, finance and power politics, and as a woman who lived beyond her years and died before her time. It was like a soap opera, but more shocking. When the police found Vicki Morgan murdered, it opened a can of worms. What kind of person did that make Vicki?

Gordon Basichis knew her better than anyone, perhaps. He talked with her almost daily during the last nine months of her life. He found an intelligent tomboy who had twice married other men to escape her mistress role and a caring soul who disguised herself to visit a dying Bloomingdale in the hospital. How did her dreams go sour?

My Thoughts
Vicki was a socialite, mistress and some may say in modern terms, a sugar baby. Her thoughts were if she was going to have sex, she might as well have sex with wealthy men. She seemed to drift towards powerful men, it wasn’t so much about looks, it was what could they offer her in terms of keeping up her lifestyle, with several affairs under her belt with various types of men including the unmarried actor Cary Grant, a Saudi Princess - the daughter of assassinated King Faisal of Saudi Arabia and a year with the very married King Hassan II of Morocco...Before 30 her life was full.

The young Vicki entered a relationship with Alfred when she was 18 and him, 53. He introduced her into the life of S&M with Vicki participating in bisexual behaviour to please him until she renegotiated the terms of their arrangement. As years went by he seemed to love her, the words exchanged, he would help her, even when told to turn his back, he was back there with her but when he becomes gravely ill, she would sneak into his room dressed as a nurse to bathe and tend to him. Vicki during this time has her $10k monthly payments cut off, a demand from Alfred’s wife, Betsy. After the death of Alfred, now homeless & her money dwindling she decides to go to court with a palimony suit for the sum of $5million from the Bloomingdale's, it was doubled to $10million when Betsy fought back. Needing money she takes in roommate/ friend Marvin Pancoast, who she met in the Cedars-Sinai mental health center, out of everything she'd escaped and gone through, this marked the end...

Being married when she met Alfred and twice briefly during her 12-year affair, it seemed she used her marriages as a way to leave the trappings and to punish Alfred, she soon bored of her second husband for having less money, a simple and obscure life wasn’t for her. She pined for the excitement she grew accustomed too and craved it like a drug & to me this was always her downfall, putting herself in these situations but no matter who she married, had a sexual relationship with...Alfred was the only one for her.

Upon first reading about Vicki Morgan over 9 years ago, it took me a while to get hold of this book and while I spent time getting through it, I found there was a lot of excuses for why she was the way she was and it might have been the author finding these excuses because of the unprofessional affair he had with her during the 9 months he spent gathering information for this book before her untimely death…That’s where I feel a lot of his words are inputted rather than it being Vicki’s, it was unprofessional, he got to know her and found a woman who was vulnerable, possibly he took advantage.

Her son, I felt was another victim, somewhat abandoned by his mother and raised & living with his grandmother and mostly seeing his mother when she’s lavishing him with an orgy of gifts and treats, to me trying to make up for not being around because she seemed too invested in herself but that’s not to say she didn’t love him but I felt she did show where her priorities lie, when a former lover she became reacquainted with said he would never remarry and especially would never marry her because of her high-minded attitude and ostentatious habits, she also felt it was because like his ex-wife she’s also brought a child into the relationship, as if she’s now burdened him, sensing his discomfort and leaving her anxious about losing her man she neglected her son, these things made me feel Vicki needed to feel wanted more than she could give that to her own son, another male.