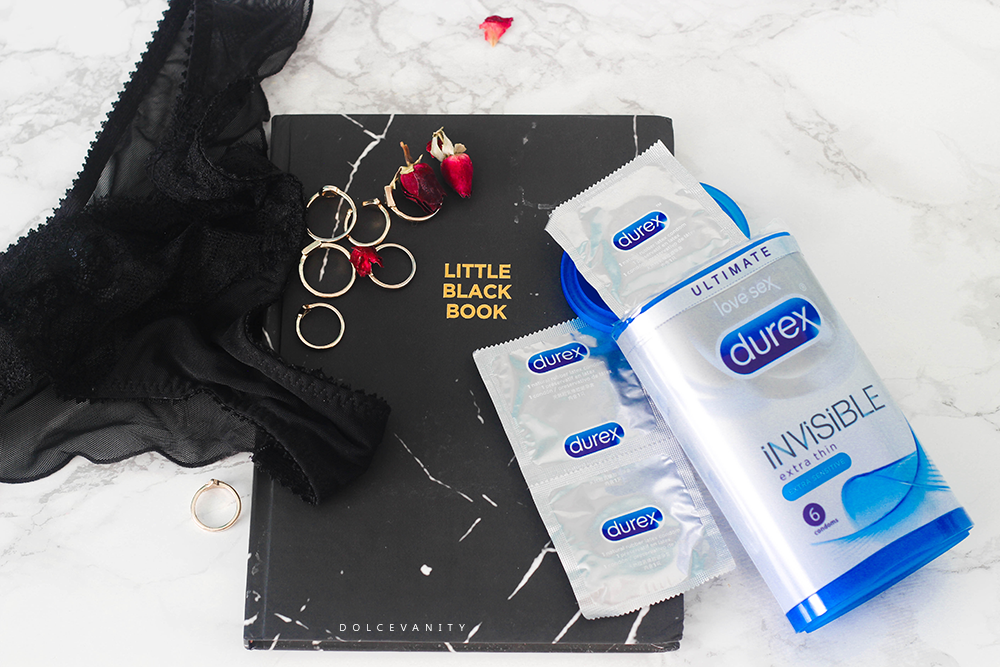 I'm sitting here staring at the Durex Invisible Extra Thin Extra Sensitive* condom box sitting by me and it got me thinking in my sexually active years I’ve never purchased condoms myself, I’ve either got them from friends or at a clinic where they’ll gladly hand you loads of a variety for free. I wouldn’t feel embarrassed to purchase them but I do understand for others it’s not as easy, while we live in a progressive society, you may feel those around are frowning and pre-judging a woman who is having sex and even purchasing condoms, so it’s much easier for you to expect the dude to bring one along. The difficulty of buying condoms for young adults just becomes another excuse not to use condoms.

So there you were, faced with the potential first hand embarrassment of purchasing the condoms, that you couldn’t go through with but now you’re faced with the dilemma that he doesn’t carry any because of the numerous excuses for not wearing one. It led me to ask around, what do men think of women who carry condoms (whether on their person or have them in their home) & asking women, if they feel comfortable to purchase and do some carry or leave it up to the man.


Q. Men, How do you feel about women who carry condoms?
"I don't like the idea of a woman possessing condoms. It exposes her true intent as a woman. Like, all you wanna do is get fucked? I admire the safety precaution but its the mans job to carry. No woman should carry! If he doesn't have one then, no fuck for him...I don't believe women should possess male condoms."

"It is very responsible of a woman to look out for her own safety and not rely on a man in that department BUT as a man you're responsible for your own safety so carry your own boots (condoms) cos if the boots have hole you gonna end up with cold feet when she's expecting or you gotta go clinic cos things aren't moving correct."

"I honestly never knew a woman that carried them around, maybe had them in the top drawer though... Which I think is good. But in the purse I honestly think it's suspect lol. I like to buy and use my own either way...Don't trust them."

"That's good, it shows you're responsible."

"Don't have one, stay protected, alie? Unless she was wifey & I'm not using condoms, I'd wonder why she's got them"

"Umm, that they practice safe safe and I guess that they're pretty loose too, man. To be carrying it you're preparing to be in that position to use it, indirectly similar to those who carry weapons but obviously not as extreme...having them at home is regular. Even if she went out to meet her partner, still regular...But to have it for having it sake on her person sends the wrong kind of message."

"It's not a bad thing. Like I might not necessarily go out expecting to go back home with someone. Hypothetically of course. But at least if I know I'm not taking a risk with my life. In many European countries women carry condoms so it's perspective and education. I'd be more concerned if a female said 'I'm clean and I trust you to be the same.' "

"For someone trusted not a bad thing at all. If you can trust someone and you want to link them it's your business but definitely equal opportunity. Man should carry and women should supply."

"I've got no problem buying condoms."

"I have no problem buying anything sexual...call me bold but if I want to buy it...I'm a grown arse woman. I have condoms at home and won't feel no way to tell a man to put this on if it comes down to it. I don't carry them in my purse personally but I have done in the past and when it was pulled out it was received negatively...but saying that a woman should take precautions about her sexual health. A man should defo have them ready if it comes down to it. Works both ways!"

"I'd rather be purchasing condoms than a morning after pill."

"You can swing an Ann Summers bag around proudly, shopping for condoms isn't a problem!"

"I don't buy them in a store but I will order them online."


Q. Do you carry condoms or leave it up to the man?
"I think both should be in the possession of them."

"I have some at home but not in my damn purse like I'm going out looking to get randomly laid."

"I don't lol. I always expect the man to have them BUT if he doesn't things aren't running until they are got!"

"Personally if a female is carrying them, she values her sexual health even if she is out sexing randomly."


My overall view is this: ladies, purchasing & having condoms should be like a political statement! There’s a terrible misconception that if a woman carries condoms with her, ‘she’s up for it’ which then leads to women not wanting to look a certain way to a sexual partner. When one from the feedback mentioned the fact "it's perspective and education", it hit the nail on the head. I remember reading in Spain they offer prostitution classes, it teaches women sexual techniques, sex toys, educates them about sex, how to conduct themselves and be safe. It really is a matter of education, I don't remember being taught anywhere that it's okay for women to carry condoms but I know in my younger days I would of been concerned what someone thought & I honestly don't know where I picked that train of thought from because the me now, I wouldn't care, I'm very brazen when it comes to the subject and act. I'm an adult who is being responsible. So if some view a woman who keeps condoms on her person because she's just being safe, regardless what she is doing with her body and with whom, she should be respected that she's cautious instead of shamed. There are reasons why I feel a woman should have condoms in whatever situation, first and foremost you are looking after your well being and considering someone else's, you can't expect a man to remember, nothing is stopping you from having fun, carrying condoms is a discrete act, they're small and who's looking?

_/Wellness
© Dolce Vanity: all opinions are my own and any sponsored or paid posts will always be clearly marked as AD or Sponsored. I also accept press samples & services to review.