Betty Beauty | Colour for the Hair Down There! 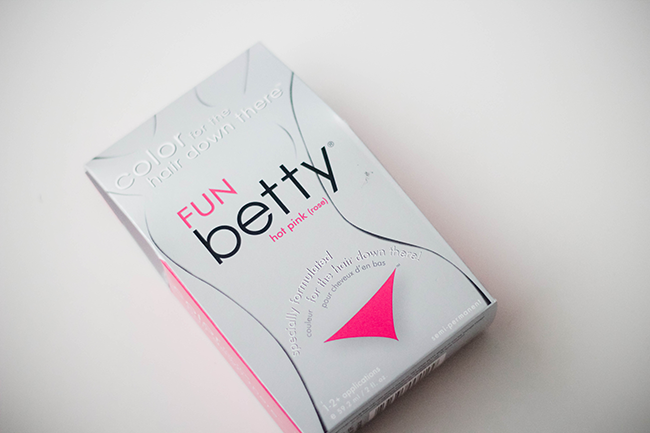 I'll try anything once so I've often wondered if other women have thought about dying their pubic hair? I have, never thought of it to be possible but it does also turn out others have too! A few months ago I saw a US review on Betty Beauty and decided I must try this out but the price I felt for the dye is quite steep, £15 for dye?! I wanted to go Kelly Osbourne lilac this year (on my head) but decided against it, surprisingly I didn't chose that colour - instead I chose my favourite - Pink! Yes I said pink! My friend said I should do streaks, á la Bagpuss.

When I mentioned to Mr. X I was going to dye my hair down there, bright pink, I was met with a "Why?" Well why not, it's something different. He told me I should leave it as a surprise if I go ahead with it so of course I decided to go ahead with it.

It's a specialised dye which it can ALSO be used to match the hair up top, paraben & ammonia free & wait for it, not tested on animals.

There is a safe area for the application which is illustrated on the step-by-step instructions - I didn't remove hair the same day I applied this as I didn't want the pores opened up but I did put vaseline around the area outside of the safe zone. 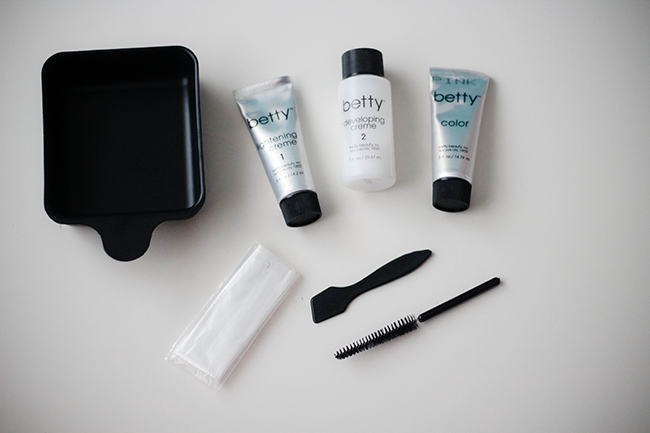 Me and my friend took friendship to another level, having to parade around for a long time as there's a long application. Once you mix half the developing creme & half the lightening creme and mix it together it needs to be combed through using the wand, just left with this white creamy application which makes it difficult to do anything, so make sure you've gone to the bathroom before all this. There wasn't an eye watering, nose tingling smell to this, there's a faint smell but I either got use to it or it just dissappeared.

Instruction paper says you can put a clingfilm piece over the hair and blowdry on a low heat to speed it up, I decided not too but was quite amazed at how quickly it began to lighten up. The way I had to sit on the chair, it was amusing to my friend, checking this hair every other few minutes, giggling and oh my gawwwd. Around 35 minutes later I decided it's time.

Once I had washed that off, which btw against my skin looked like I had no hair whatsoever it was onto applying the colour, which would end up being the messiest part so this was the time I decided to use the clingfilm as a protector. My ass can't sit still so yeah I ended up with some of the dye on my thighs but it's cool, doesn't stain for long, carefully wash that off with a soapy flannel and by the next wash it'll fade or completely of gone. Another 30 minutes later, I washed it off and was shocked to see this hair that I've had since I hit puberty now a bright fuchsia, then afterwards looking at it, looked more copper / reddish than a bright pink, I guess having no previous references I can't say how it is supposed to look.

So how did he react to it? With another resounding "Why? I told you leave it!" If that was said, I wasn't included in that conversation. I do remember the 'It's your body' part but whatever, I do not business.

All I know is, I may be left with ombre hair at the end of this, day three I'm already in need of a root touch up, yeah I know but I've never made it a shy fact that my hair free days are for a day n half IF THAT before it starts to show itself. You get max two applications out of this, I guess you could use more of the dye or lightening it depends how much hair you have to cover. These come in a range of colours so anytime you just want to have fun for yourself, surprise your OH, bit vain if you have gone grey down there (does that happen?) You can dye the hair, black, brown, auburn, pink, blue, red, or lilac.

These would make great gifts if you was having a hen party, little goody bags or gifts for a friend, to be honest I probably would purchase again, it's just something fun & different. The waiting process is a pain mainly cos of where it is. There was no extra spring in my step, just a lot of giggles and I had actually forgotten about it by the next day until I was in the bathroom & half hungover and very tired, there was a lot of WTF moments.

I think for March 2014 for Ovarian cancer awareness we should all dye our Betty's BLUE!!


Betty Beauty £14.99
Love, LaaLaa xo
_/Body
© Dolce Vanity: all opinions are my own and any sponsored or paid posts will always be clearly marked as AD or Sponsored. I also accept press samples & services to review.