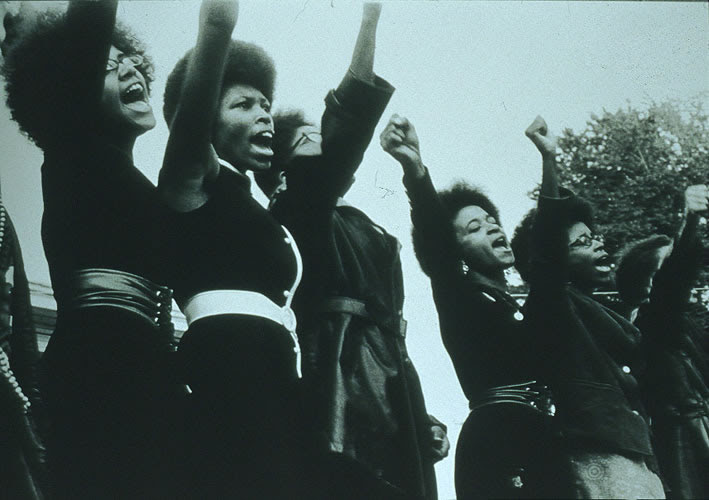 I mentioned on my Dolce Vanity Facebook page if anyone had watched the documentary 'Dark Girls'? I found it thought provoking. The documentary has women who have grown up with self esteem problems within themselves because of their skin tone. We've got the beauty industry who are embarking and endorsing skin lightening by selling pills and skin bleaching creams. The media feeds it to us that the lighter, the better(?) by photoshopping celebrities to be lighter and more 'universally appealing'. Then there's also the words that can cut deeper than a knife and be the heavy baggage carried throughout life.

Does the topic run towards the old age issue of white & light vs dark skinned?
I'm the creation of a dark skinned black mother and a white father, growing up and even when guys would constantly 'need to know' if I was mixed, they'd ask, 'White mum, black dad?' I would say nope other way around I'd get a similar response, 'That's unusual, it's supposed to be the other way' Well no it's not supposed to be and are you shocked that my father is white cos my mother is a black woman? Until I was on the suffering end of bullying because of being lighter, did I start to question myself and it was by a girl of darker complexion to the point I started to even hate myself for being mixed and different. It drove me to leave the school, it made me angry towards myself. I wanted to die & tried to do it, I allowed her words of hate, maybe jealousy and frustration of her own to make me feel as if I was so wrong. One woman in the documentary confessed to being part of a group of girls who would beat up lighter skinned girls in the bathroom and even put hair removal cream in their hair. Most feel it's not other ethnicities they feel the stigma / taunting from but from black people themselves. The separation can happen, sometimes we might feed into it unconsciously. I know I have a few times, #teamlightskinned #teamlonghair ..team who gives a f! Are we constantly segregating ourself because there's a need to let people know don't put me in this box, I am not X ...I'm Z ....don't confuse the two. I feel our issues are more difference than anything else. Difference scares the human race, nobody wants to understand or respect the difference between them and someone else. It's easier to judge!


Some say the blacker the berry, the sweeter the juice
I say the darker the flesh then the deeper the roots
-"Keep Ya Head Up"
2Pac
Is the self hatred within their own community rather than racism?
The lack of support from other women, how we begin to segregate, how men view and talk about it, can it play it's part? I think so! Me and my friend was talking about the affects of self esteem and yes I feel men can play a part within this too. As soon as we are not 'picture perfect' we are automatically inferior of another and most time it's against a woman they don't or won't ever have or probably may not even want them. I've spoken to males over the topic, how do they feel about women with darker complexion? The responses I have got are varied as to why they wouldn't date one ('A black woman doesn't look good next to me' .... 'I can't date a girl who is getting her hair done at the barbers too'....'They wear weaves'....'Too much attitude'. People close to you may tell you I can have just as much sass and attitude, don't be fooled, let's not pin point them stigmas.) but it goes back to the basis of they prefer a light skinned or mixed woman. We cannot be faulted for who we are attracted to but don't pick & find faults.


I am not your expectations
I am not my hair
I am not this skin
I am a soul that lives within
-"I Am Not My Hair"
India Arie
I had a conversation regarding self esteem and I view it as 80-90% of low self esteem can be from self image. Our surroundings make us feel a certain way about ourselves, as women today we have different pressures than our mothers and grandmothers but we are feeling the pressure to be whatever is viewed as right but one that is alive is skin tone. One mother said her daughter doesn't like to be called black, she is lighter than her siblings & will just say her family are a lighter brown. Her mother witnesses how she is looked upon and treated different from others outside the home, she has taught her sons to treat their sister as a princess and treat her with the utmost respect so that when her daughter grows up, she isn't feeling as if she isn't good enough and looking for love in all the wrong places once out the house. These things begin at home, feeding the children and letting them know, what you see in the mirror is beautiful no matter what, reinforcing that confidence. Within the documentary it would be nice to of heard from women who have grown up with the confidence despite their skin colour and how they feel and look upon it to give it a two sided feel as not everyone feels the same way.


I wonder why we take from our women
Why we rape our women, do we hate our women?
I think it's time to kill for our women
Time to heal our women, be real to our women
And if we don't we'll have a race of babies
That will hate the ladies, that make the babies
-"Keep Ya Head Up"
2Pac
On Sunday's there's a chat on Twitter at 8PM GMT #BrownBeauty for the past few weeks it's given us a platform to discuss topics, women of brown skin tones coming together to discuss the industry, it's been long overdue in my opinion but it's a way to include us all and embrace the various skin tones and the struggles we all face when it comes to the industry. It will be interesting to see the topics that will occur, if it will get deeper than just industrial/media beauty.

We have to stop ignoring the elephant in the room and begin addressing it.
_/Social Issues
© Dolce Vanity: all opinions are my own and any sponsored or paid posts will always be clearly marked as AD or Sponsored. I also accept press samples & services to review.